I am surprised. Nay, I'm astonished. No, no... flabbergasted! Err, actually...  there's not a word in the English language that describes my sentiment after trying the Jenkki Frozn salmiac.

Brace your self, dear readers: the Jenkki Frozn salmiac gum is not only edible, but I'm still chewing on it as I type this very message. 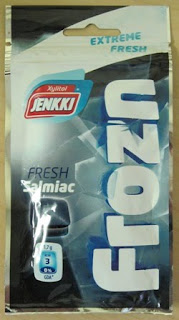 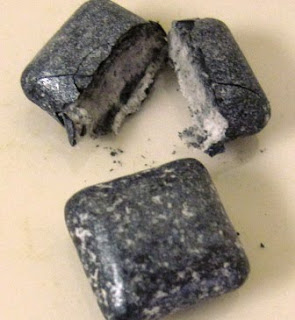 And just to be clear, I have not yet intentionally seared my tongue in a desperate attempt to save pain on my quest for salmiakki. My sinuses are not blocked and I can smell scents as well as ever. And so far as I can tell, I still have functioning tastebuds.

When I opened the bag of Frozn gum, I was assaulted with the unmistakable aroma of menthol. If there was any doubt that my sinuses were clogged, a whiff of Frozn would have cleared them out. Like any other Finnish candy, I was a little hesitant to bite down on the gum, but decided to go all in. I chomped down on two of the square pieces and began to chew.

Within moments, my whole being was infused with menthol, almost as if I had taken a swim in a lake filled with Halls Coughdrops. But it wasn't unpleasant - it was actually soothing. Any hint of that dreaded salt flavor that accompanies Salmiac was overpowered by the intense menthol flavor.

And as far as gum goes, this one holds its flavor; I'm still chewing it and, while it doesn't have the same methol kick, the flavor is still there.

This rates as edible and halfway-decent!
Posted by Alex Papadimoulis at 2:43 PM