Last week, I was out of town and met with a few clients on the west coast. Somehow, one of our small-talk conversations shifted to a discussion on candy.

"You know," I said, "it's a shame I didn't bring any of the 'special' liquorice that I have back home. You guys wouldn't believe this stuff! It's Finnish or something, and it's infused with this super-salty salt -- ammonium chloride -- which is not your regular old sodium chloride table salt."

I got a few quizzical eye-brow raises and the unmistakable I'm-pretty-sure-you-shouldn't-eat-ammonium-chloride look. But nonetheless, they all expressed interest in trying this exotic delicacy and made me promise to bring it next time I'm on-site.

Yeah, right. Like that's going to going to happen. As I'm sure you all know, giving someone salmiac is #6 on the "Top Ten Ways to Kill a Relationship" list, and today's tasting of salmiakki-meteorit confirms why. 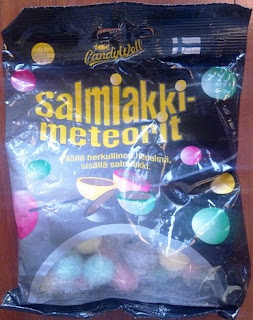 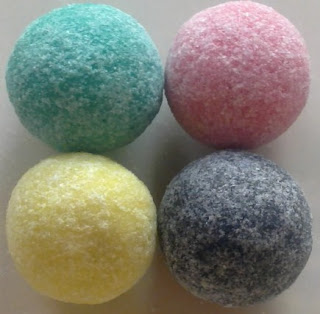 To the untrained eye, these spherical candies look like they could be sugar-coated chocolates. Popping the red-colored ball was not an unpleasant experience: there was a sweet, raspberry hard-coating that was just waiting to be chomped on. Bracing for the worst, I bit down... only to find the unmistakably spicy taste of liquorice.

The Yellow (banana, I think) and Green (no idea what flavor) shared the pleasantry: a hard candy coating with a liquorice center. Excited that this might be an edible -- nay, enjoyable -- candy, I eagerly popped the black candy ball in my mouth, only to find it repelled by my gag reflex almost immediately.

Somehow, that little black candy packed more salt taste than salt itself. Which is surprising, considering they all appear to be coated in about the same amount. No matter, because of the black ball of salty death, I have no choice but to rate the salmiakki-meteorit as almost edible.
Posted by Alex Papadimoulis at 11:36 PM 21 comments: 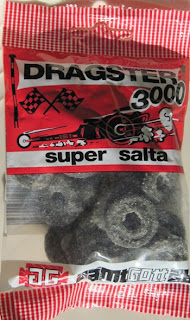 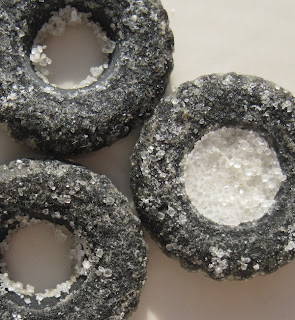 Tried as I might, I had to rush to the garbage can to expel this offensive “candy”, literally drawing tears as I ran. It goes without saying that the Dragster 3000 Super Salta is inedible. However, it’s the first (and hopefully one of the last) that also gets the title caustic.
Posted by Alex Papadimoulis at 4:10 PM 38 comments: