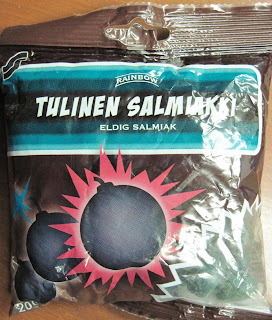 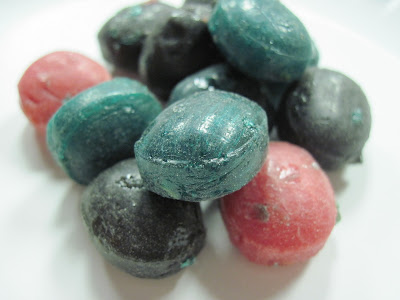 And then I bit down. Whatever unholy substance was amalgamated into this candy's outershell was in its purist form in the center. Pain doesn't even begin to describe what that sensation was like. Without bothering to look for a napkin, I expectorated this horrid concoction as quickly as possible. It took a full ten minutes for the pain to dissipate as well. Clearly, this candy earns the caustic label.
Posted by Alex Papadimoulis at 10:00 AM 50 comments:

It's been a rough couple weeks. I've come to learn firsthand that crushed-up Turkin Pippuri is incredibly toxic, and causes the unavoidable side-effect of not wanting anything to do with Salmiac. But I'm over that now, and am ready for another step in this salty sojurn.

Katjes Salty Fish seemed like the ideal re-introduction to Salmiac. "Wanna enjoy the real sea side feeling?" the back of the package read, "Then get yourself blown away by these little liquorice fish! They come with tis special portion of salmiak salt and are a unique liqorice experience... sooo salty!" 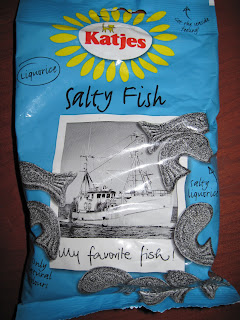 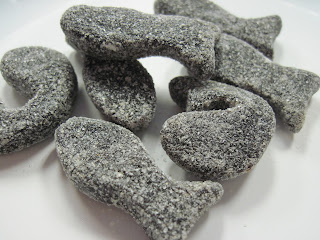 Seeing something covered with that much salt is troubling. If my Dragster Super Salta experience taught me anything, it's that salt can be painful... nay, torturous. Tasting one of these fish was not something I looked forward to.

Nonetheless, I dived straight in the deep in popped one in. Expecting to last two, maybe three seconds, I was surprised to find that, not only did I not spit it out, but I started chewing it. And I kept going. And then I had another. And another. In fact, I ate the entire pile of pictured fish -- that's seven in total.

I don't know what to say, and quite frankly, I'm a bit scared. The salmiac dust must have mutated my DNA and permanently perverted my palate. And as a result of this, the Katjes Salty Fish earned the highest rating given to date on Salmiyuck!: halfway decent.
Posted by Alex Papadimoulis at 2:37 PM 30 comments: